The Signs of Democratic Deconsolidation

In many parts of the world, democracy seems to be under threat. Populism is on the rise, as is public dissatisfaction with such key features of liberal democracy as political parties, representative institutions, and minority rights. Even in the long-established democratic regimes of Western Europe and the United States, attachment to democracy is weakening, particularly among younger citizens. In a widely discussed article in the July 2016 issue of the Journal of Democracy, Yascha Mounk and Roberto Stefan Foa explored the concept of democratic deconsolidation. In the forthcoming January 2017 issue, in an essay entitled “The Signs of Deconsolidation,” they expand their analysis and seek to identify the “early warning signs” that indicate democracy is in trouble. Yascha Mounk will elaborate upon the arguments in his new article, and Stanford University’s Larry Diamond and the Brookings Institution’s William A. Galston will provide comments. 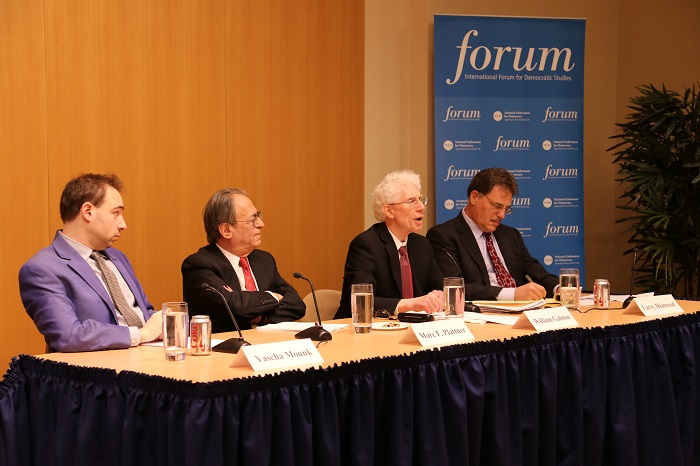 Larry Diamond is a senior fellow at Stanford University’s Hoover Institution and Freeman Spogli Institute for International Studies. He is the founding co-editor of the Journal of Democracy and co-chair of the Research Council of NED’s International Forum for Democratic Studies. His sixth and most recent book, In Search of Democracy(Routledge, 2016), gathers together three decades of his work on democratic development, particularly in Africa and Asia.  He has also edited or co-edited more than 40 books on democracy and democracy promotion around the world.

William A. Galston holds the Ezra K. Zilkha Chair in the Brookings Institution’s Governance Studies Program, where he serves as a senior fellow. A former policy advisor to President Clinton, Galston is an expert on domestic policy, political campaigns, and elections. His current research focuses on designing a new social contract and the implications of political polarization. Galston is the author of eight books and more than 100 articles in the fields of political theory, public policy, and American politics.  His most recent books are The Practice of Liberal Pluralism (Cambridge, 2004) and Public Matters (Rowman & Littlefield, 2005).

Marc F. Plattner is founding coeditor of the Journal of Democracy and cochair of the Research Council of the International Forum for Democratic Studies. Until 2016, when he reduced his schedule to part time, he also served as NED’s vice president for research and studies. From 1984 to 1989, he was NED’s director of program. Over the past two decades, he has coedited with Larry Diamond more than two dozen books on contemporary issues relating to democracy in the Journal of Democracy book series, including Authoritarianism Goes Global: The Challenge for Democracy (2016) and Democracy in Decline? (2015). He is the author of Democracy without Borders: Challenges to Liberal Democracy (2008) and Rousseau’s State of Nature (1979).